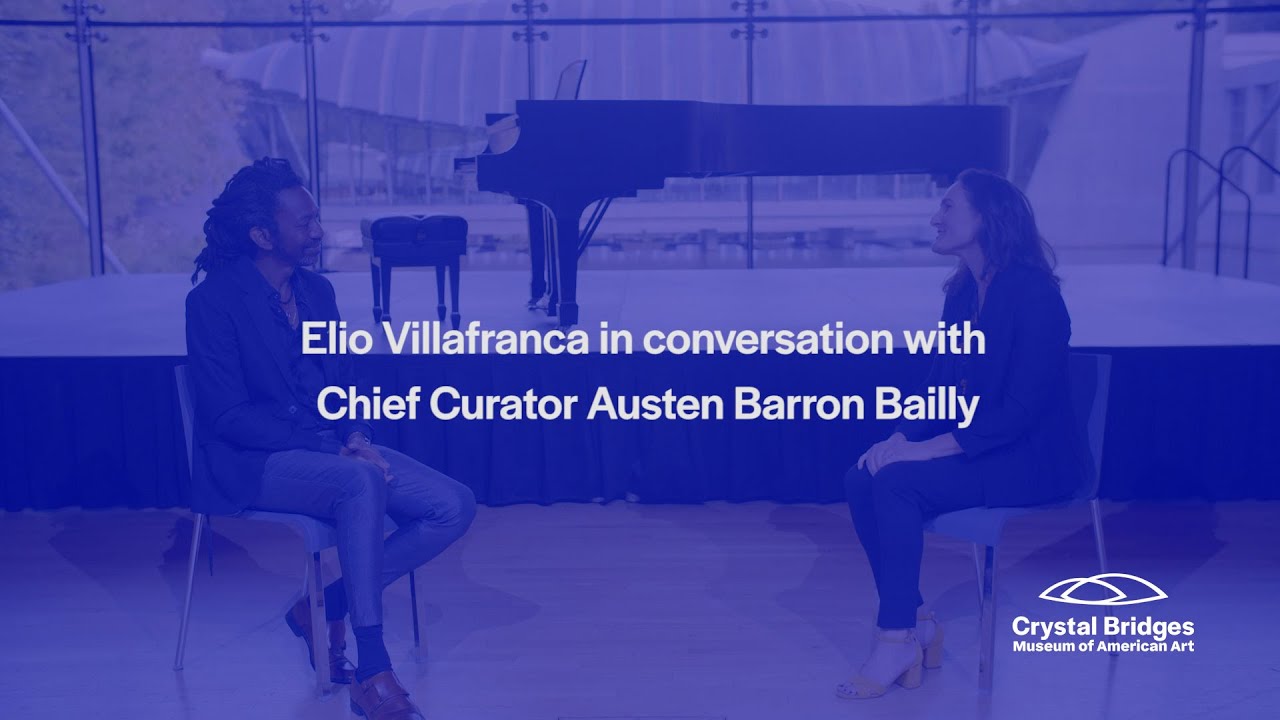 Educator Speaker Series: One Person Can Make a Difference with Pam Longobardi and Sean Teuton

ABOUT VILLAFRANCA’S PERFORMANCE AT CRYSTAL BRIDGES
Elio’s performance brought together selections from his Grammy-nominated album “Cinque” and his two newest projects, “Don’t Change My Name” and “Standing by the Crossroads.” Each piece invoked the stories, struggles, and triumphs of the Caribbean peoples as well as the artist’s own experiences. Elio was joined onstage by Dr. Jeffry Murdock and the vocal talents of a choral ensemble from the University of Arkansas.

“Cinque” tells the story of Joseph Cinqué, formerly known as Sengbe Pieh, a West-African man of the Mende people who was born as a free man in the country of Sierra Leone and then captured and transported to Cuba as a slave. While onboard the Cuban schooner La Amistad, Pieh freed himself and others from their shackles and took control of the ship in June of 1839, where their story takes an unexpected turn towards justice.

“Don’t Change My Name” is inspired by the story of Florentina Zulueta, a princess who was enslaved in her original homeland of Dahomey (present day Benin) in 1843 at the age of 15, and transported as a slave to Cuba. This three-movement opera evokes the resilient spirit of Zulueta and honors her work championing the Arará people of Cuba.

Finally, “Standing by the Crossroads” speaks about the spiritual meaning of Crossroads in the Caribbean and Elio’s own life experiences as an artist living in Cuba and the many Crossroads situations he encountered.

Villafranca was classically trained in piano, percussion, and composition at the Instituto Superior de Arte in Havana, Cuba. Since his arrival to the U.S. in 1995, he’s been at the forefront of today’s pianists and composers, fusing classical and jazz with music from the African diaspora. Based in NYC, Villafranca is a jazz faculty member at The Juilliard School of Music, Manhattan School of Music, New York University, and Temple University in Philadelphia.

ABOUT “IN AMERICAN WATERS”
For over 200 years, artists have been inspired to capture the beauty, violence, poetry, and transformative power of the sea in American life. Oceans play a key role in American society no matter where we live, and still today, the sea continues to inspire painters to capture its mystery and power.

On view at Crystal Bridges Museum of American Art November 6, 2021, through January 31, 2022, “In American Waters” is an exhibition in which marine painting is revealed to be so much more than ship portraits. Guests will be transported across time and water on the wave of a diverse range of modern and historical artists including Georgia O’Keeffe, Amy Sherald, Kay WalkingStick, Norman Rockwell, Hale Woodruff, Paul Cadmus, Thomas Hart Benton, Jacob Lawrence, Valerie Hegarty, Stuart Davis, and many more. Discover the sea as an expansive way to reflect on American culture and environment, learn how coastal and maritime symbols moved inland across the United States, and consider what it means to be “in American waters.”

Learn more about the exhibition: https://crystalbridges.org/calendar/in-american-waters-2/